Clark was founded in 1903 out of George R. Rich Manufacturing Company in Chicago by executives of the Illinois Steel Company.

One of the employees of Illinois Steel Company, Eugene B. Clark, improved both manufacturing and management processes and at that time became equal partner in the company. Few years after it was established, it merged with another company and formed Clark Equipment Company, named after Clark. In 1919 a division called CLARK Truck Tractor Company was formed. This still exists as CLARK Material Handling Company. It manufactured drill bits, steel castings, axles, transmissions, material handling equipment, construction machinery and many other products. The Clark Equipment Company was in business until 1995, when it was acquired by the Ingersoll-Rand Co. in a hostile takeover and continued as CLARK Material Handling Company.

In the first few years from when it was founded, the company built Tructractor in Buchanan, Michigan by employees of the CLARK Equipment Company. The Tructractor was the world's first internal combustion-powered industrial truck. The Tructractor was originally designed with a flat cargo box and was manually loaded and unloaded. It was used to transfer materials between CLARK's various axle, drill and wheel departments. One of the customer of the plant was impressed with its practicality and asked CLARK to build Tructractors for them. In the following year, eight Tructractors were built. In the next year, they produced 75 units.

In the years that follow, production processes were improved and that led to the Trucklift. The Trucklift was the first lift truck with internal combustion engine that used hydraulics. At that point, they left behind mechanical gears and cables to lift the load.

Different kind of businesses required different kind of machinery, so in 1923, they introduced Duat tow tractor. Its main purpose was to help with pulling the lumber, materials from various industries and freight. By modifying the Duat tractor by adding lifting attachment, it became the first forklift truck, similar as we know today.

As their business grew and time passed, Clark introduced more modern trucks: first came Tructier, then the Carloader that was mass produced, Utilititruc was heavy-duty manly used in metal fabrication and remained in production until sixties and Clipper, with its 2000lb lifting capacity.

And then, the war years came; CLARK produced around 90 percent of US military forklifts and tractors. During that time, CLARK introduced new models ready for indoor and outdoor use, for small spaces and off-road.

After the war ended, CLARK expanded their production overseas: First came Australia, then Germany and then Brazil and South Africa. They added electric powered trucks next to those with internal combustion. In 1976 they produced 500.000 th truck which is still in service today.

New models were introduced with improved safety standards. CLARK was the first lift truck manufacturer to provide the Employer's Guide to Material Handling Safety on every truck they produced. And in 1997 1.000.000 forklift was produced.

Currently, there are more than 250.000 units of CLARK lift trucks that are operating across North America and 350.000 units world wide.

For industrial work C-40 series is recommended, but if you want to put it into intensive workload, C-50 will satisfy your needs. These two series have lifting capacity above 8000lbs. Their main comparative advantage is two-stage filter system that eliminates 98% of dirt and dust. Electric forklifts come in GTX/TMX/CTX/GEX series. These series of forklifts can turn 90 degrees with or without the load increasing their maneuverability. Besides those two, you will also find walkie pallet trucks and stackers, platform pallet and platform pallet stackers. CLARK’s long tradition and their slogan “Built to last” will satisfy your needs for material handling machinery.

CLARK also owns for those who are looking to repair and extend the life of forklift. Their main North American Parts Distribution Center is located in Louisville, Kentucky. Large dealer support network expands all over 550 worldwide locations in 80 countries. 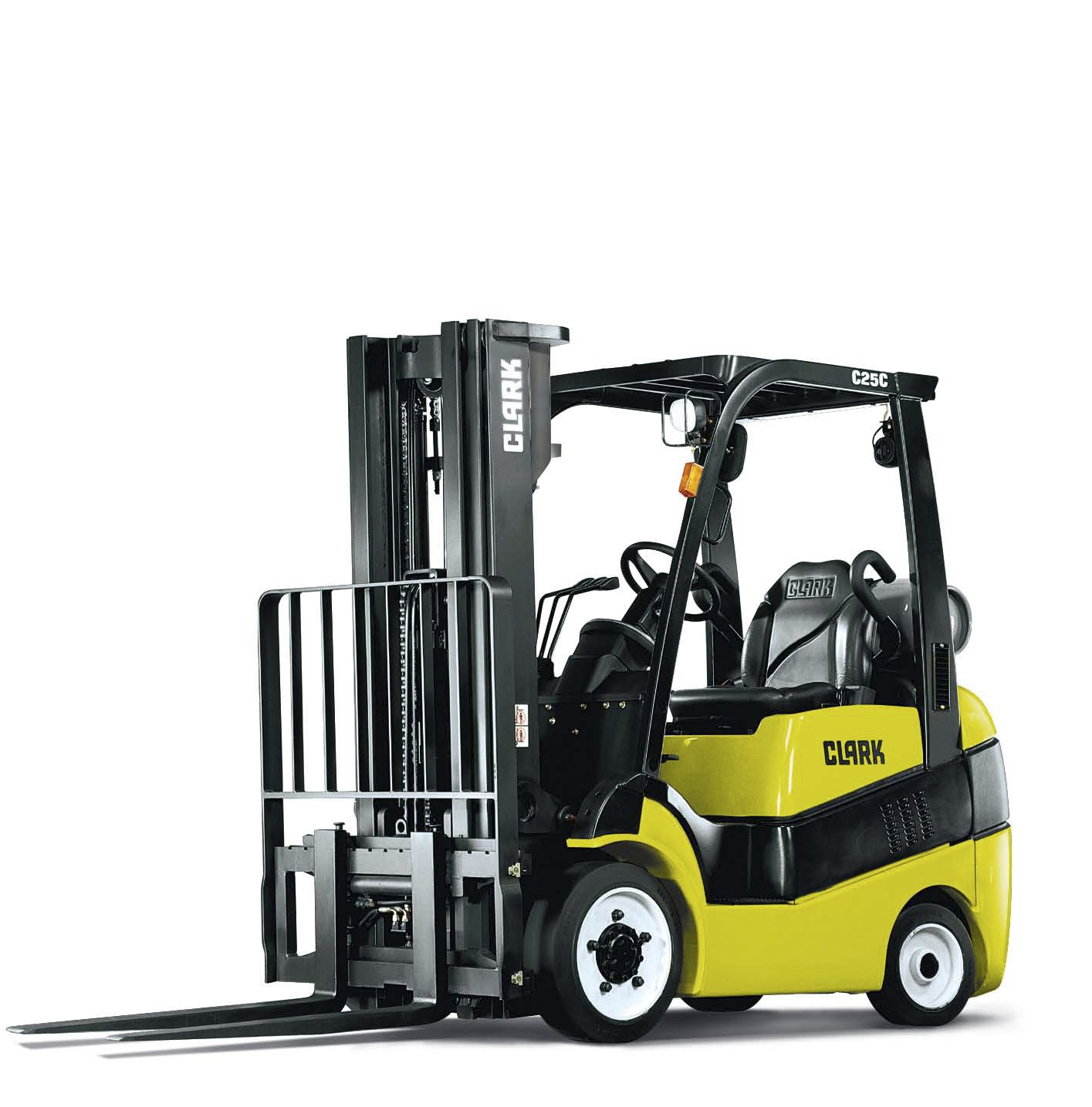 CLARK’s products are designed and manufactured in compliance with their moto: “Built to last”. They were pioneers in operator resistant system that its main purpose was to protect operator and his safety. CLARK was also the first forklift manufacturer in the world to be certified in compliance with the internationally accepted quality standard ISO 9001 for all its forklift manufacturing plants worldwide. CLARK'S Korean facility acquired its ISO 14001 (Environmental Management System) certificate in 2001. This places CLARK in the market to be prepared for any environmental restrictions and regulations. They also adopted “Lean manufacturing” for assembly parts to ensure efficient method of manufacturing. CLARK also developed their own Clark Optimized Production System which also focuses on the quality of the products rather than just efficiency.