Mitsubishi started collaborating with with Caterpillar Inc. in 1992 to produce forklifts for global market in Caterpillar’s main production facility in Houston, Texas. The facility extends on over 600.000 square feet, producing not only forklifts but also modern robotics.

The manufacturing facility functions in compliance with ISO 9001 standards as well as ISO 14001 that ensure not only production efficiency but also satisfy environment safety regulations. Besides this one, company expands its production capacity in factories in Netherlands, Finland, Japan and China.

During the World War they became the biggest Japanese government contractor.

In the fifties, company was divided into three separated companies merging them back together in the sixties under the same name: Mitsubishi Heavy Industries.

The steam tractors of the 1890s and early 1900s were extremely heavy, sometimes weighing 1,000 pounds (450 kg) per horsepower, and often sank into the earth. One of the founders of the Caterpillar company, Benjamin Holt, thought of wrapping the planks around the wheels. He replaced the wheels on a steamer with a set of wooden tracks bolted to chains. In 1904, on Thanksgiving, he successfully tested the updated machine. Company photographer said that he has observed that the tractor crawled like a caterpillar and Holt seized on the metaphor. Two years after that, Holt sold his first steam-powered tractor for 5.500$.

Holt's track-type tractors played a support role in World War I. Even before the U.S. formally entered WWI, Holt had shipped 1,200 tractors to England, France and Russia for agricultural purposes. These governments, however, sent the tractors directly to the battlefront where the military put them to work hauling artillery and supplies. The Holt tractor became a major artillery tractor, mainly used to haul medium guns. They were also the inspiration for the development of the British tank.

After the World War I struggle to sell heavy machinery, company merged with C. L. Best Gas Tractor Company. Both companies were impacted by the transition from a wartime to a peacetime, further inhibiting sales. And that’s how the Caterpillar Tractor Co is formed.

The company is one of the largest in the world and was ranked number 1 in the industry and 44th in Fortune’s 500 Companies in 2009. 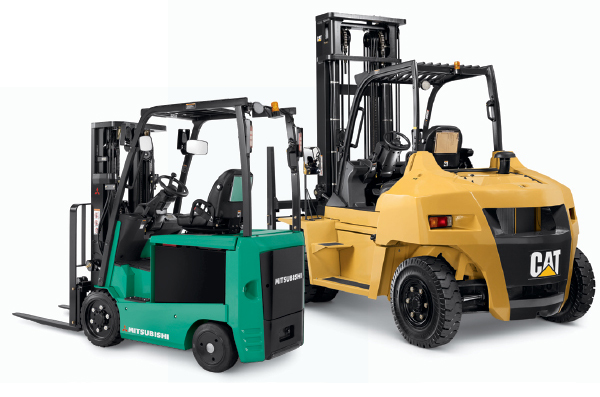 Business philosophy best describes President of MCFA group: "100% Safety, 100% Quality, 100% On Time – these concepts are critically important to our customers, and as a result, are the focus of the work we do every day at MCFA.”

Besides forklifts, Mitsubishi also offers a wide range of powered pallet trucks, stackers, order pickers and the reach and multi-way trucks. Different kinds of trucks are offered in different countries depending on the region.

In addition, providing quality forklift parts to its customers worldwide, it also helps them in protecting their asset by offering a wide variety of warranties options.

By understanding what efficient material handling means, CAT developed different kind of forklifts, for every single need there is. Caterpillar offers internal combustion lift trucks powered by LP Gas with cushion tires with with lifting capacity starting from 2.000lb up until 15.500lb. That kind of models start with 2C and GC prefix. Models with internal combustion lift trucks and with pneumatic tires start with prefix 2P and P and are powered with Gas and LP Gas lifting up to 12.000lb. Diesel powered trucks offer higher lifting capacity, all the way up to 36.000lb. Electric counterbalanced lift trucks have a little bit lower lifting power, up to 6.500lb and their models start with 2E and E.

When it comes to spare parts, Caterpillar has gained considerable experience and dealers network in offering global product support.

All of the company's parts are completely reliable and durable in terms of their standards and also assure complete exchange compatibility.